An Evening of Science & Symphony! 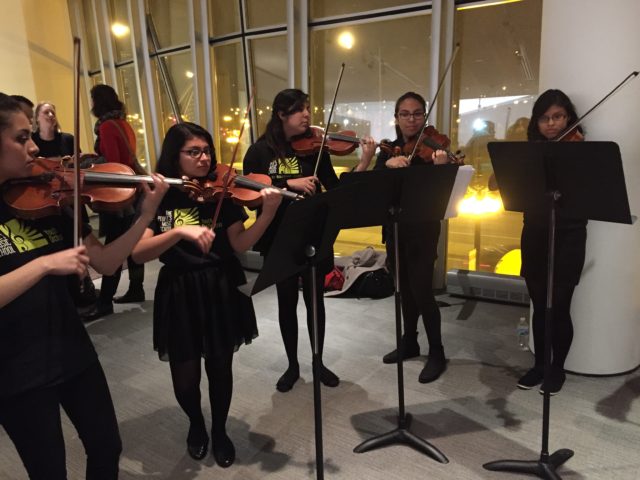 On Thursday, December 10th, 2015, The People’s Music School and KV 265 combined forces in an unprecedented collaboration of science and symphony. Hosted by the beautiful Feinberg Theater at Venue SIX10, guests were treated to an evening of films produced by KV 265‘s Dr. Jose Fransisco Salgado with live scores performed by our Albany Park Youth Orchestra.

Dr. Salgado’s films included stunning NASA images of “The Blue Earth”, outer space, and Jupiter – complete with aerial views of sand dunes in Namibia, thunderstorms over Mexico, and auroras on both Earth and Jupiter. Remember when your jaw dropped while watching Planet Earth for the first time? It was like that, but better, and with a youth orchestra performing live while you watched. Incredible.

Terrance Gray, TPMS faculty of over 25 years, led the orchestra through moving performances of the following works:

Dr. Nina Kraus, of Northwestern University’s Auditory Neuroscience Lab Brainvolts, layered on more incredible science by sharing her research on how music impacts the brain. Did you know… that sustained time learning and performing music rewires the brain? …  that the brains of adult musicians are “younger” than the brains of adults who are not musicians? … that the benefits of music are lasting – so that even adults who no longer learn, practice and perform music still have the biological benefits of their childhood music involvement?
As conductor Terrance Gray put it – music creates building blocks for sustained, valuable learning in ways that no other activity can. We agree!
Immediately following the program, guests were invited to mingle and enjoy cocktails and hors d’oeuvres. SLAM (Student Leadership & Mentorship) high school chamber group students wow-ed the crowd during the reception.
Thank you to everyone who joined us for this one-of-a-kind collaboration of astronomy and music, and a special thanks to The Joseph and Bessie Feinberg Foundation for sponsoring the event.
Learn more about TPMS’s Youth Orchestra, KV 265 and Brainvolts.
See more photos of the event on our Facebook page!